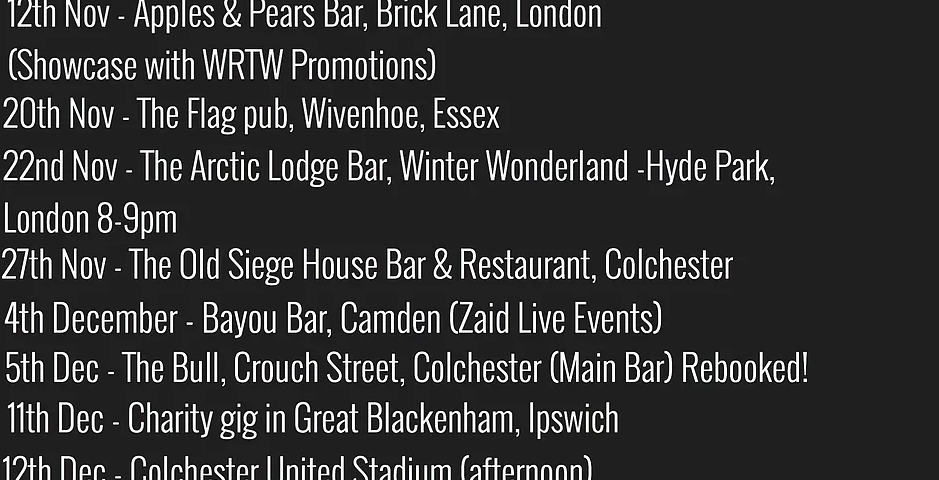 The last month has been fairly quiet in terms of performances and gigs.. Adriano who supports me on acoustic guitar for live performances has been away a lot throughout October, so I took this time to get booking some gigs for the next coming month and November now looks to be our busiest month yet for shows! Lots of debut gigs at new venues both locally and in London.  We will also be performing at the famous Winter Wonderland in Hyde Park, London at The Arctic Lodge Bar from 8pm on 22nd November, which is very exciting! Please scroll below to see my full gig list for November-December.

I’ve also been song-writing and developing some new ideas for songs, which I’ve been working on. I counted how many songs I’ve written, which are either completed or are in development and there are over 50 songs!! I need to hole myself up somewhere and really finish everything I’m working on.. I’m really excited to get recording more of what I’ve written. The two songs I recorded with Downtown Artists in London with producer Ian Post, who has worked with big names such as Alicia Keyes, are now ready to put out to the world and they are sounding BIG! I really can’t wait to release them but all in good time!

On 27th October I was on the radio in New York, America! This was my debut American radio interview and I was very excited. I spoke to DJ Vegg on the show about how long I’ve been in music, what advice I’d give to others and my plans for the future. They played ‘Brushing Off The Dust’ (which you can see the debut music video for the single, on my website and youtube channel) and Vegg told me what a great reaction the song received and how much interest I got off the back off the interview, which was great. It’s so good when radio stations give artists, especially indie artists a platform to be heard and I’m very much in support of the show. Big shout out to singer/songwriter Aislinn Ní Dubhghaill for introducing

me to the show and Vegg 🙂

surprised me with a lovely party (I genuinely had no idea). I got spoilt rotten and enjoyed birthday meals out both locally and at The Shard, London

and went to see The Lion King at The Westend.

time for other songs which I’ve written.

That’s it for now, stay in touch by connecting with me via my facebook page, twitter and instagram etc. Just click the links to go through to my social media! I’ll be posting about the gigs I’m doing and I’ll update you on how everything has gone at the beginning of December (I can’t believe we are nearly at the end of 2015 already!?)

Bye for now and thanks again for all of your support!